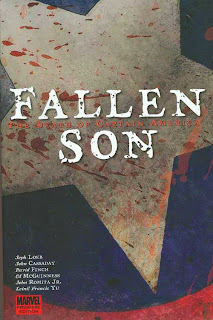 I walked into my LCS a few months ago to find something new to read that may not be on the shelves of Borders. I found a few boxes full of trades that were marked "Buy One, Get One Free." I couldn't resist that offer. I first saw The Death of Captain America, and then I found Fallen Son: The Death of Captain America. Having not been a fan of Captain America, I asked the man behind the counter what the difference was between the 2 books. He (Tony, of Tony's Kingdom of Comics) informed me that Fallen Son was kind of the aftermath from other perspectives. I decided to pick it up along with it's predecessor.

Jeph Loeb kept me interested in Captain America and what the other superheroes of the Marvel Universe were going through after his death. I guess I shouldn't have been surprised. I knew that Loeb had his hands in NBC's Heroes, but it wasn't until after I was done with this trade that I Googled Loeb to find out his other writing credits; such as Commando and Teen Wolf. I enjoyed both, so I shouldn't have been worried.

With so many artists in play for this trade, I felt fearful that too many cooks may spoil the soup... so to speak. Not so. The several different art styles didn't detract from the story one bit. I already knew that I liked the art of John Cassaday and John Romita Jr., I just was unsure about David Finch, Ed McGuinness and (most of all) Leinil Francis Yu.

Allow me to clarify. I have seen Yu's artwork all over the pages of Wizard over the years, so I wasn't sure it would mesh cleanly with everyone's art. You can definitely tell the difference from the rest, but it works very well for Wolverine. Not my favorite style, but you really feel that you're in Wolverine's world.

In a nutshell, this is well worth the read. Pick this book up if you like Captain America or not, but I highly suggest that you read The Death of Captain America first. If you happen to go to Tony's Kingdom of Comics in Keizer, Oregon, tell Tony that you read a review on Zanziber's Point Of View.
Posted by John "Zanziber" Rogers at 6:51 AM
Email ThisBlogThis!Share to TwitterShare to FacebookShare to Pinterest
Labels: #ThrowbackThursdays, Reviews