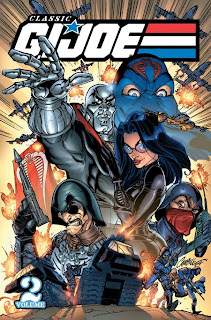 In this volume of G.I. Joe, we see the introduction of characters such as Destro, Kwinn and the infamous Dr. Venom. We also have the good fortune of being introduced to Major Sebastian Bludd poet and mercenary. In the cartoon series, both Destro and Bludd are portrayed very differently. I don't recall a single occasion in the cartoon where Major Bludd recited a poem. Kwinn and Dr. Venom, who are fairly important characters in this volume, are never used in the series. I think it would have been nice to have more continuity between the cartoon and the comic series. More the cartoon following the comic rather than the other way around.

While on this subject of the cartoon series, I have been slowly watching the DVD's. I can't believe how silly and often times campy it was. I'm thankful that the comic series was there to keep me interested in G.I. Joe. I do appreciate the major cartoon plotlines like the M.A.S.S. Device and the Weather Dominator. They kept me glued to the TV in the afternoons as a child. I never thought how unrealistic the cartoon was. I guess that's a reason why I am trying to complete my collection of the Marvel comic series. I can't believe how much some of the later issues are going for.

Back to this particular trade... It happens to have one of the issues that I have read several dozen times; issue #18 "Destro Returns". This is the issue where both Joe and Cobra are trying to get Scarface before the other. This illustrates Destro using his wrist rockets for the first time. I never thought something like that could be possible, even though the look still looks fairly impossible. It still looks cool.

I really look forward to finding a reasonably price copy of volume 3, not because this volume ends with a cliff hanger, but I really enjoy Hama's writing and the art brings me back to childhood in a good way. It takes me to a time where I collected the action figures and actually played with them rather than collecting them for possible future gains. If I had the kind of money then as I do now... and still have the happiness of otherwise being supported by my parents since I was a kid... I think I may have also collected and not played with some of those same figures along with all the Star Wars figures I had. Man! That would be sweet.

Again, back to the trade. Find it. Buy it. Read it and keep it. Yo Joe!
Posted by John "Zanziber" Rogers at 8:46 PM
Email ThisBlogThis!Share to TwitterShare to FacebookShare to Pinterest
Labels: #ThrowbackThursdays, Reviews