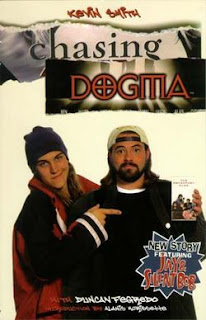 Let me state again that I am a HUGE fan of Kevin Smith's work. I share several of the same interests with Smith, including Star Wars, comic books, DVD's and his movies. When I first laid eyes on Jay and Silent Bob in Mallrats, that was when I fell in love with Smith's work. I had to see all his other movies. At the time, he only had Clerks, the aforementioned Mallrats, and Chasing Amy. I would later use Chasing Amy as background for my budding comic book inking (tracing) interests... but that's a different story.

If you've watch Smith's movies, and are a fan like me, you've probably often wondered "Whatever happened between the events of Chasing Amy and the beginning of Dogma?" This question is similar to the one posed by fans many years ago that helped to develop the Shadows of the Empire storyline for Star Wars to answer the question "What happened between The Empire Strikes Back and Return of the Jedi?" In this trade lies the answer to your burning question about the former.

The art in this trade isn't the best I've ever seen, but fits well for the prime subjects. This is not your parent's comic book nor is it a superhero title. This is Jay and Silent Bob at one of their finer... un-filmed... moments. The art helps to capture the essence of both Jay and Bob, especially in the first few pages where you see the room that they've crashed-out in. From video games, silly string and beer to a used blow-up doll, this room screams Jay & Bob were here. (More Jay, I think, than Bob.)

If you're a fan of Kevin Smith's movies or writing, you'll enjoy this trade. This is definitely not for the younger generation, much like Smith's movies. There's a reason why all of his movies are R-rated. This trade is a toned-down version, but still is fairly graphic with sex and let's not forget Jay's affinity for using whatever foul words may be on the tip of his tongue at the moment.
Posted by John "Zanziber" Rogers at 5:28 AM
Email ThisBlogThis!Share to TwitterShare to FacebookShare to Pinterest
Labels: #ThrowbackThursdays, Reviews