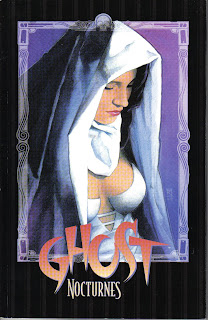 "All Elisa Cameron wanted was a decent job, a nice apartment -- in short, a normal life. What she got was a paranormal life! Elisa Cameron is Ghost, the star of Dark Horse's wildly popular series and host of her second collection of stories. Ghost: Nocturnes does what its title implies -- evokes the thoughts and feelings of the night." (Source: Amazon.com)

In the 90's, Dark Horse published a series of comics collectively known as "Comics Greatest World". There were 4 areas that encompassed this series: Arcadia, Golden City, Steel Harbor and The Vortex. Out of this series, most of the titles had a short run as full series away from the original. Of all the titles given a chance to live on their own, I believe that Ghost was the title that lasted the longest.

Eric Luke has a good sense of style in his writing. Elisa Cameron (the main character) is believable in that I could easily see someone in her situation doing exactly what she is set on doing. Protection and revenge. I'm not sure that I enjoyed the Predator crossover, but Dark Horse has to throw him in to every title now and then, don't they?

The prime reason I enjoyed this book is the artwork. I have always been a HUGE fan of the art by Adam Hughes. I feel that he is one of the best artists of the female body. Unlike with many of his other characters and covers, Hughes doesn't make the breasts on Elisa look huge. I respect that he decided that this character would have less than DD's. This made her seem more true to life than, let's say, Wonder Woman, Catwoman or Lara Croft. I just appreciate that Hughes toned it down for this title. Don't get me wrong... I am also a fan of breasts. One of my favorite covers is from Catwoman #51. 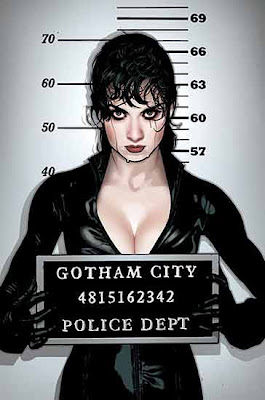 I also liked the fact that instead of publishing the trades a "Volume 1" and such, Dark Horse decided to title them with the storylines: "Nocturnes", "Ghost Stories". I have both of these trades because I was a fan of this series in the early days. As I recall, I feel that my interest started to lessen after issue #5 with the Predator crossover. The original series only lasted for 58 issues, but you will occasionally see Elisa make a cameo in other titles such as Hellboy and Batgirl. Just like a real ghost, this title and main character come in and out when you least expect it.

I would recommend picking up a copy of this trade and giving it at least one good read. I took my copy to the Emerald City ComiCon in Seattle, WA to have Adam Hughes sign it. He is a nice guy to chat with, and I also recommend taking the opportunity to meet him in person.
Posted by John "Zanziber" Rogers at 7:48 AM
Email ThisBlogThis!Share to TwitterShare to FacebookShare to Pinterest
Labels: #ThrowbackThursdays, Reviews