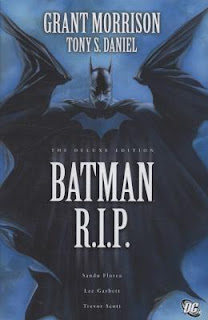 I'll admit that I am an on-again/off-again Batman fan. I loved the original TV series with Adam West and Burt Ward as a kid. I also enjoyed watching the Super Friends cartoon. When Tim Burton made the Batman movies, I was enthralled. When Joel Schumacher took the reins of the movies, I lost interest, as many other did.

When DC announced that Batman was going to have his back broken by Bane, I was drawn to reading the comics. By then, I was watching the animated series, so this was an easy transition. I collected the entire Knightfall, Knightquest: The Crusade, Knightquest: The Search and KnightsEnd. After the end, I lost interest again. I would occasionally find an interesting issue and pick it up to read, but I never really got back into reading the series full time.

I guess what kept me from seriously collecting Batman is the same reason why I never readily collected Superman: Too many titles to try to collect and read without enough interesting storylines to keep me interested. This is another reason why I enjoy collecting and reading trade paperbacks and graphic novels. Everything is all in one spot and I don't have to make sure I collect every issue of a crossover I would like to read that spans over multiple titles. (i.e. Civil War, Final Crisis, etc.)

Then I read somewhere that Batman had actually died. This caught my interest just like my interest was peaked when Superman and Captain America "died". I decided that I had to read this story. So, I picked up this trade writen by the fantastic storyteller Grant Morrison.

This story is like no Batman story I've ever read in my life. Batman becomes so seriously f-ed up that his backup plan... a subconscious new identity known as "The Batman of Zur-En-Arrh"... thanks to "The Black Glove". This story kept me riveted from front to back, so much that I started collecting the "Battle for the Cowl" crossover and the new Azrael series.

Tony Daniel makes the Batman universe come to life. When I watched "The Dark Knight" for the first time, Heath Ledger's portrayal of the Joker frightened me. When I read this trade, Daniel's version of this classic character had me glued. This wasn't Jack Nicholson or Cesar Romero, but an even darker version of what Ledger's performance brought to Batman fans. After reading this trade, I ran out and picked-up Brian Azzarello's "Joker" trade... which I am eagerly waiting for my pile of books to dwindle to where this little beauty lies so I can finally read it.

The story and art combine to make this trade one of my all-time favorites. It re-kindled my interest in the Dark Knight. I recommend picking this one up for a good read and a great addition to your collection.
Posted by John "Zanziber" Rogers at 7:28 PM
Email ThisBlogThis!Share to TwitterShare to FacebookShare to Pinterest
Labels: #ThrowbackThursdays, Reviews