Angel: After the Fall Volume 1 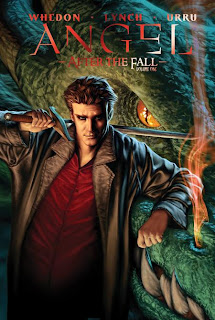 Title: Angel: After the Fall Volume 1

Just as I have mentioned when reviewing Buffy the Vampire Slayer Season 8, I am a big fan of Joss Whedon. IDW started this series to begin shortly after the final TV episode of Angel. Wolfram & Hart has fallen, and all Hell has literally broken loose on the world.

Brian Lynch has brought the feel of the TV series to this printed series. He and Whedon worked well together to plot this series. The writing hooked me back in to the "Whedonverse" of Angel just as Whedon's writing on Buffy did. Lynch has a firm grasp of who the characters are and where they come from. More importantly, he also has a great understanding of what they're going through. It was as though there wasn't a 4 year hiatus for the series. Lynch really puts it all back together from where Whedon originally left it off.

Franco Urro has a very interesting art style. The background characters lack definition, but I think that is intentional so they don't interfere with the main focus of the panels. His work makes me somewhat believe that David Boreanaz, J. August Richards and Amy Acker may have come to his studio to model for him.

This trade was one of the first series of hardbacks I have ever picked-up for my collection. I have to admit, I much prefer it over the traditional perfect bound trades. Sure, you will spend an extra $5 for the hardcover, but I think it's worth it to keep this trade in your collection. Being a book collector as well as a comic collector, I have found that it's easier to maintain the quality of a hardcover of that of a paperback any day.

Again, if you were a fan of the TV series, pick this trade up. I have the entire series up-to-date, and I look forward to bringing you continued reviews for the rest of it.
Posted by John "Zanziber" Rogers at 6:36 PM
Email ThisBlogThis!Share to TwitterShare to FacebookShare to Pinterest
Labels: #ThrowbackThursdays, Reviews