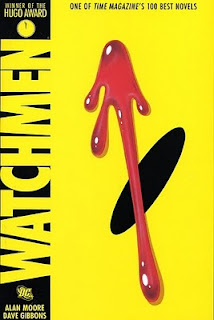 Has any comic been as acclaimed as Alan Moore and Dave Gibbons' Watchmen? Possibly only Frank Miller's The Dark Knight Returns, but Watchmen remains the critics' favorite. Why? Because Moore is a better writer, and Watchmen a more complex and dark and literate creation than Miller's fantastic, subversive take on the Batman myth. Moore, renowned for many other of the genre's finest creations (Saga of the Swamp Thing, V for Vendetta, and From Hell, with Eddie Campbell) first put out Watchmen in 12 issues for DC in 1986-87. It won a comic award at the time (the 1987 Jack Kirby Comics Industry Awards for Best Writer/Artist combination) and has continued to gather praise since.

The story concerns a group called the Crimebusters and a plot to kill and discredit them. Moore's characterization is as sophisticated as any novel's. Importantly the costumes do not get in the way of the storytelling; rather they allow Moore to investigate issues of power and control--indeed it was Watchmen, and to a lesser extent Dark Knight, that propelled the comic genre forward, making "adult" comics a reality. The artwork of Gibbons (best known for 2000AD's Rogue Trooper and DC's Green Lantern) is very fine too, echoing Moore's paranoid mood perfectly throughout. Packed with symbolism, some of the overlying themes (arms control, nuclear threat, vigilantes) have dated but the intelligent social and political commentary, the structure of the story itself, its intertextuality (chapters appended with excerpts from other "works" and "studies" on Moore's characters, or with excerpts from another comic book being read by a child within the story), the finepace of the writing and its humanity mean that Watchmen more than stands up--it keeps its crown as the best the genre has yet produced. --Mark Thwaite (Source: Amazon.com)

I wanted to start this review with the words that really sum-up much of my feelings. Then, I wanted to tell my version.

Alan Moore is a very creepy genius when it comes to his writing. I have yet to read any of his work that doesn't make me think. Unlike many of Moore's fans, I think I actually started reading his work on The League of Extraordinary Gentlemen, where most I believe started their fandom with From Hell or V for Vendetta. It wasn't until after I watched the movie versions of these books that I actually picked them up and read them. I'm glad I did.

When I first heard that they were creating a Watchmen movie, I was mildly skeptical. I didn't think that a true interpretation of the story would go over well with moviegoers, and felt that too many people would get lost in the Tales of the Black Freighter storyline. When I saw the first trailers in the theater, I was impressed and hopeful. I loved V for Vendetta and enjoyed The League of Extraordinary Gentlemen, but I knew that neither of these had been named "One of Time Magazine's 100 best novels". I waited in anticipation. How would they capture the essence of Doctor Manhattan and Rorschach? How much of Rorschach's backstory would they actually be able to fit into a movie?

Then came the media hype. Everything was Watchmen for the longest time. I was very concerned that this movie was going to become a bigger epic failure that Batman and Robin. I was wrong to feel this way. I think they were able to create a live action version of the story very well, without ruining the original work. Obviously, there were some liberties taken and changes made, but I feel that this was an incredible movie.

So naturally... I had to read the trade again.

My first time reading Watchmen, I remember having a hard time reading through all the Tales of the Black Freighter story. I didn't completely understand the necessity of it as I read. In the end, I made the connection. For some, this trade may also catch you in the same way. I urge you to continue reading to the end... It's worth the effort and the payout is an incredible story.

As many others (I'm sure), my favorite character is Rorschach. I love the twisted sense of justice he has. He reminded me of Frank Miller's Dark Knight, a Batman with an "F-off!" attitude. Rorschach played by his own set of rules, and was pissed that the very government and people that he was helping to protect turned their backs on him. If I were in his shoes, that would upset me as well. The difference is that I am not a vigilante hero.

In my opinion, the only other character with a flavorful background in this trade is (of course) Doctor Manhattan. That's why I feel that the movie version took a good deal of time giving you a look into what created both Manhattan and Rorschach. These were the 2 biggest characters in the trade, and they became the forefront of the movie. I feel that Moore captured the reality of what would happen if someone were given the ultimate power of the universe. They would ultimately get tired and bored of it and want to get away, thus falling right into the insidious plot of Ozymandias.

Dave Gibbons' art seems to have been made to depict this story. Reading this trade, I felt like I was in their world. It's not like reading a superhero book where the sights and sounds around the characters are familiar, you are in a different reality. There are moments where I see glimpses of the world from various movies. The biggest I recognize is from the world of Blade Runner. Not futuristic, but grimy and dirty. Trash all over and much of the inner city is not well maintained.

I would have to agree with most other people who have reviewed this trade before me. This book is well worth picking up and reading. This has a permanent spot in my collection, and has for several years. Earlier this year, I actually had to replace my original copy because it was beginning to fall apart from years of being read. I felt that the expense was justified.

Posted by John "Zanziber" Rogers at 3:31 AM
Email ThisBlogThis!Share to TwitterShare to FacebookShare to Pinterest
Labels: #ThrowbackThursdays, Banned, Reviews