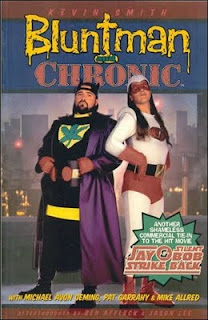 For those of you who don't actually know who Bluntman & Chronic are, I suggest renting "Chasing Amy". This is arguably Kevin's best cinematic work. This is where you get a true sense of where the characters come from. Give it a shot. You may become a Smith fan like myself.

As far as this graphic novel goes, Kevin Smith brought he writing skills to the comic very well. The art is alright, except I am not a big fan of Mike Allred. Fortunately, Allred's work is confined to a small story at the end of the book. The characters fit well within his art, but I just don't care for it. Good thing that Michael Avon Oeming and Pat Garrahy are here to save the most of the book.

For those of you who are already Kevin Smith fans and or of Jay & Silent Bob/Bluntman & Chronic, then it's just another reason to keep liking. For those who know they don't like Smith's work, don't bother picking up this book. For those who are undecided or are unfamiliar with the works of Mr. Smith, give it a try.
Posted by John "Zanziber" Rogers at 7:04 PM
Email ThisBlogThis!Share to TwitterShare to FacebookShare to Pinterest
Labels: Reviews