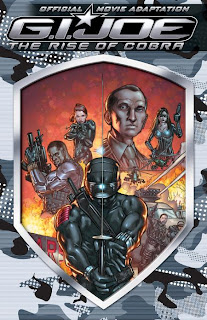 Growing up in the 80's, I was a HUGE fan of the G.I. Joe products. Comic books. Action figures. The cartoon series. I read, collected and watched religiously. I still have some of my action figures and vehicles and I also still have the original comics that my Dad bought me when I was sick and the local grocery store was out of copies of MAD magazines. Those were the days when my friends and I would get home from school, rush over to Steve's house, and make sure we watched every episode of the original cartoon series. Between my friends and I, we had nearly all the toys from the early to mid 80's. Sure, a few of them fell prey to firecrackers and M-80's, but those were only the figures we didn't like.

When I first heard that Hasbro was making a live-action G.I. Joe movie, I was skeptical like most fans. I was already collecting the 25th anniversary line of action figures and trying to complete my collection of the original Marvel comic books, so Hasbro had my attention anyways. I vowed that I would see it, no matter what.

When IDW started publishing the new series of G.I. Joe comic books, I jumped on the bandwagon with no regrets thanks to my local comic store; Tony's Kingdom of Comics. Through their excellent subscription service and customer service, there have been very few issues from the various IDW series that I have missed. I was a kid again. Sure, the stories were new and the characters had been modernized, but they still had the feel I fell in love with as a child.

I took the day off to make sure I could watch G.I. Joe: The Rise of Cobra movie on the first day. I had been planning to make the midnight showing... but the fact that I couldn't stay awake past 9pm precluded me from participating. So, I made the first matinee.

There were a few items I wouldn't have minded being changed, but all-in-all, the movie was excellent. When the TPB was released, I couldn't wait to read it to see the comic book spin. I was disappointed.

The TPB followed the same plot, and had much of the key elements of the movie, but it lacked much of the substance and story that was brought to life in the movie. I found it hard to believe that I was reading was supposed to be what I had viewed in the theatre. Big holes in the story. Much of the back story was left out. The fight scenes between Snake Eyes and Storm Shadow were covered in too few panels. The script was a little hard to follow at times, if you hadn't already watched the movie. The part with Ripcord flying down the 2 nanomite missiles was treated in a few panels that didn't quite have the same impact as it did in the movie.

I feel that had the adaptation been able to be presented in 5 or 6 issues rather than only 4, Denton Tipton may have had better success. The art was well done, but I feel that Casey Maloney doesn't like to draw backgrounds. There are quite a few panels where the characters are in the middle of color rather than a place, while not distracting, just mildly bothersome.

My recommendation is to either check this out at your local library, or find a friend who has already invested their money into it and borrow it to see for yourself. I would also suggest watching the movie either before or after reading it so you have a sense of what has been left out.
Posted by John "Zanziber" Rogers at 4:10 PM
Email ThisBlogThis!Share to TwitterShare to FacebookShare to Pinterest
Labels: #ThrowbackThursdays, Reviews