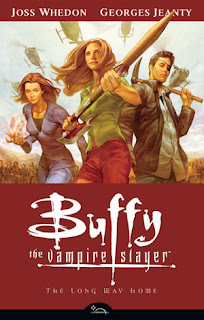 Another pop culture phenomenon that I was a member of was that of Buffy the Vampire Slayer on television. I became a fan of the Whedon-verse, much like many who read my reviews. From Buffy to Angel. Firefly to Dollhouse. Joss knows how to write. It's too bad that they took Buffy, Angel and Firefly of TV before their time. Soon enough, Whedon was tapped by Dark Horse to continue the Buffy saga, thus beginning Season 8.

Picking-up where the television series left off, this first in the series of trades still provides the feeling of the TV series. Whedon has not lost anything writing the characters: Buffy, Willow, Xander, Dawn and a new selection of Slayers. I find it very amusing that the mysterious threat introduced in this series is called "Twilight". No relation to Stephanie Meyer's books.

Buffy is the leader of a much larger group on newbie Slayers. Now that Sunnydale has been laid to waste, they are headquartered in a castle in England and the group is huge. The Slayers also seem to be well funded as the tech gear they have at their disposal is well beyond anything they could've had in sunny California. Also, since Whedon doesn't have a television budget to worry about, the sky is the limit on what they can do and add to the series.

Jeanty's art is nice to look at, but sometimes I feel that the background characters... such as the multitude of Slayers... blend into the background and individuals get lost easily. There are a select few new Slayers that stick-out, but many of the rest of them seem to be simple duplicates. All in all, he does a good job to bring Whedon's vision to life.

I started reading the series with the first issues, and it won me out. Since Buffy, Angel and even Firefly had been cast aside on TV, this helped fill that hole. When I got behind on the monthly issues, I stopped buying them. Thank goodness for Dark Horse to publish the trades. As you can tell from my list of books to be reviewed, I've made sure to keep on top of the recent releases.

Joss Whedon's writing and Gerorges Jeanty's art help bring Buffy and her crew back in a good way. The series is definitely high on my list of what to read. If you were a fan of the TV series, you will probably love this book and enjoy the ongoing series. If you've actually never watched the series, I recommend watching it before reading Season 8 to get a better view of the Whedon-verse.
Posted by John "Zanziber" Rogers at 12:45 PM
Email ThisBlogThis!Share to TwitterShare to FacebookShare to Pinterest
Labels: #ThrowbackThursdays, Reviews